Nightfall in Men: Is it Normal? What Causes Nightfall?

Nightfall in Men: Is it Normal? What Causes Nightfall?

Nightfall in men, also identified as a wet dream, sex dream, or sleep orgasm, is an impulsive orgasm that includes ejaculation for males while sleeping.

Nightfall in men can cause them to wake up or sleep during it, and one can characterize wet dreams by unintentional and involuntary ejaculation while sleeping. It is not an issue if it occurs infrequently. But it becomes a medical problem if it frequently occurs over time.

Everyone has had wet dreams at some point during their adolescence. It’s safe to assume you had a wet dream if you wake up with wetness in your boxers. The best way to get accurate information regarding nightfall is to see a doctor.

Is Nightfall in Men Good or Bad? Is it Natural?

Nocturnal emissions are most common in adolescents and early young adults, but they can happen at any time after puberty. According to scientists, the method of nightfall is entirely physiological.

What Are Its Causes of Nightfall in Men?

Many times, a person is on sedatives or heavy medicine dosage. These can also have chemical side effects on the body. As a result, it leads to semen leakage. Weakened nerves can also cause wet dreams in men. Because your body is laidback and semen can discover a natural pathway outside during the night, a clogged prostate gland can end up causing semen leakage. One theory claims that one can experience nocturnal erections because of your mental states, such as anxiety, stress, or depressed mood. Also, you are more likely to experience nightfall if you live an unhealthy lifestyle.

Laziness and Obesity can also cause nightfall, and Obesity and laziness can bring on this condition. Moreover, the meaning of nightfall is still ambiguous and frequently merged with religious and moral values, contributing to myths. Additionally, this is a completely false belief that must be dispelled, and it is entirely a medical condition that can be prevented and treated. 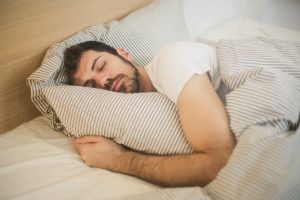 What Are The Side Effects of Nightfall?

Physically, sexually, and mentally, nightfall can weaken a person. The following are the usual signs of someone suffering from wet dreams:

People should dispel the myths about nightfall and recognize that it is common among men.

Numerous myths revolve around nightfall, such as the belief that:

Nightfall is a very common occurrence that is scientifically proven to have occurred at least once during the lives of the majority of men. Some men had many nocturnal emissions, while others never had.

Is There Any Treatment for Nightfall?

The majority of men have difficulty determining what nightfall is and how to stop nightfall. Don’t worry. We’ve got you covered with the following solution to your nightfall treatment issue:

Ayurveda suggests several treatments for nightfall. To avoid this, Ayurveda recommends yoga and meditation, as well as a relaxing bath. Because of the reduction in wet dreams, the Ayurvedic medicines help restore a lot of confidence and strength. you can also try dhatu rog ki allopathic medicine to stop the constant leakage of semen.

How can Ohman Help with Wet Dreams?

Ohman presents you with a range of medications for any of your sexual problems. You can always consult and trust Ohman for purchasing sexual health medications. Moreover, Ohman’s experts and professionals will help you find the right medicine for your underlying cause and prescribe you the right dosage.

The term “nightfall” refers to a natural concept in adolescent children and must not be considered taboo. Furthermore, the emphasis should be on preventing nocturnal emissions. Nightfall-related myths, such as becoming weak or experiencing erectile dysfunction, are fake stories.  If you seem unable to solve the issue of how to stop nightfall, consult a doctor for better treatment and outcome.